The objective of Blackjack is for you to draw cards that total 21 or come closer to 21 than the dealer without exceeding 21. All cards count at face value except for the King, Queen and Jack which count as 10 and the Ace which counts either 1 or 11 as you decide.

Once you have two cards in front of you, you can choose to “stand” (draw no more cards), or take a “hit” (draw one or more cards) until you reach 21 or come as close as possible. However, if you go over 21 you “break” and automatically lose. A winning hand pays even money.

Now the dealer turns over the “hole” card and acts on the hand according to the rules of the game. The dealer must draw up to a “hard 17”. An Ace and a 6 is considered a “soft 17”, and forces the dealer to draw an additional card. With a total of “hard 17” or more, the dealer must “stand”. At the end of the game, if your count is the same as the dealer’s it is a “push” (Tied).

Once the dealer has removed the first card of any hand from the shoe, you may not handle, remove, or alter any wagers that you have made until the hand is completed. Once a wager is on the insurance line, a wager to double down, or wager to split pairs has been made and confirmed by the dealer, no player may handle, remove or alter such wagers until the hand is completed.

This is standard 6-deck Blackjack with optional bonus wagers.

In addition to the Blackjack wager there are two optional wagers — Lucky Ladies and Lucky Ladies Bonus Jackpot. You place these bets at the same time your primary bet is made.

You are betting on whether or not your first two cards equal a total of twenty. Additional bonuses are paid if your two cards are suited (e.g. Ace of Clubs and Nine of Clubs) or matched (e.g. two identical cards such as two King of Diamonds). Special bonuses are awarded if your Queen of Hearts pair occurs at the same time the dealer has a blackjack.

The outcome of the primary blackjack bet has no bearing on the Lucky Ladies bet and vice versa. You can win on one and lose on the other.

Each player’s highest winner will be paid only.

All standard PALACE CASINO Blackjack procedures will be used with the following exceptions:

All Bonus Payouts are made on the following non-doubled hands totaling 21:

The progressive wager is an optional $1 (only) wager. The player must make a minimum base game wager in order to qualify for play.

After all initial cards are dealt and prior to the base game being played, the dealer will check to see if either of the player’s original two cards match the dealer’s UP card. There are two payoff amounts for each respective wager, a Suited rank match and a Non-suited rank match. Players are paid for each card where there is a wager and a match. Once all the Match the Dealer bonus wager payouts are made the base 21 game is played.

Either immediately after dealer’s down card is exposed, or after the 21 game is played and as the dealer is settling the 21 game wagers, the dealer checks the original two cards of all players with the Match the Dealer Down Card Bonus wager to see if either of the player’s original two cards match the dealer’s down card in rank. Players are paid for each card where there is a match. Match the Dealer Progressive Payouts are paid as follows:

When a player that makes a Match the Dealer Progressive wager gets 2 suited Matches (both of the player’s initial two cards match the Dealer’s Up and/or Down Card in rank and suit), that player will win a Progressive Award of either 10% or 100% of the progressive jackpot for the 2 Suited Matches, as described above.

Our Card Room and Restaurants
are open from 11am to 3am.
All Washington state Covid-19
precautions are followed. 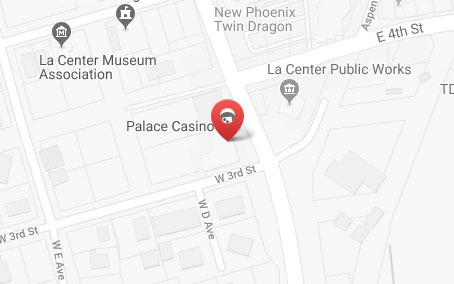